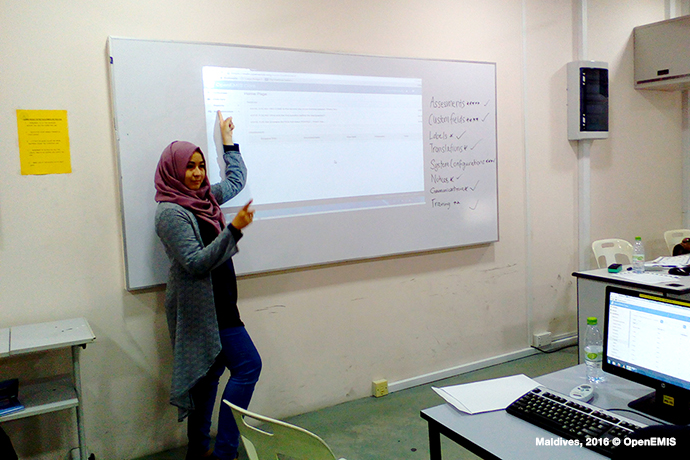 OpenEMIS Maldives was launched nationally on 16th July, 2017! Click here to read more about the launch.

Composed of 26 coral atolls, the Republic of Maldives is made up of about 1,200 small islands in the Indian Ocean.  As one of the world’s most geographically dispersed countries, establishing an effective strategy for distribution of services and supports across the territory is a great requirement for the government of Maldives.  In the education sector, developing a nation-wide Education Management Information System (EMIS) has been one of the highest priority of the Ministry of Education (MoE) in order to meet its needs to improve the quality of the services and outputs relevant to education.

The MoE of Maldives has been pursuing its effort to the systematic collection and organization of educational data through EMIS since the early 2000s, in accordance with the global initiative guided by the Dakar Framework for Action (MoE of Maldives, 2001).  In 2015, OpenEMIS project was initiated in response to the changing context and needs of the education system in the Maldives and as a means of achieving better education outcomes by taking advantage of the latest information technology. Especially, a custom-built Early Warning Tracking system was integrated to more systematically address the issue of out-of-school children in the Maldives as well as in response to the global initiative [Out-of-School Children Initiative (OOSCI)], led by a partnership between the UNESCO Institute for Statistics (UIS) and UNICEF.  The objectives of the project are (a) to ensure that existing education data are put to good use, (b) to rectify current gaps in the country’s EMIS by replacing the old system with a new system fully owned by the government, (c) to build capacity and transfer technology for the government to be able to update and manage the new EMIS from year to year, (d) to leverage technological mechanisms for education information dissemination, and (e) to provide data analytics training to education planners to ensure that the data collected by EMIS are integrated with all education-related data in the country for improved decision-making.